About three weeks ago I decided to turn off the MW band attenuation in the Icom IC-7300 - this is a sub menu option in the settings that is on by default. Wow what a difference! I started spotting stations much further away from Australia, Hawaii, Alaska, midwest to the east coast.

I've been spotting these stations semi-individually on and off, finally got a good selection of them in one night: 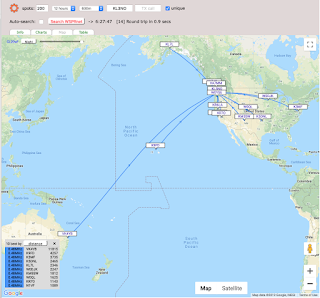 The antenna I'm using on receive is the ZS6BKW with no additional matching, just an HF 1:1 current choke at the bottom of the ladder line, remote ATU (bypassed) then 10ft coax drop to ground where it runs around to the other side of the house. The other RX settings I configure when running WSPR with the IC-7300 are NB and NR off, notch filter off, AGC fast set to 0.3 seconds.

Since turning off the MW band attenuation, I would start spotting the closer stations in California as soon as it got dark through until sunrise like clockwork. First I thought it was propagation changing with the D layer absorption which quickly disappears at sunset and quickly returns at sunrise.

Turns out it's more than the D layer at work, there are several strong AM broadcast stations in my area, during the daytime they are very strong and overload the receiver in the IC-7300. At night these stations lower output power and/or change their antenna pattern, this reduces signal levels at my location to a level where the receiver can cope. 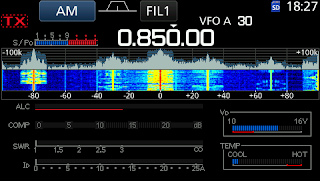 Screen capture of the strong signal on 850 kHz during daytime, S meter maxed out at +60dB. There are several more at +40 to +50dB. 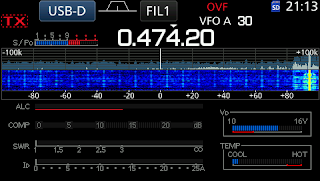 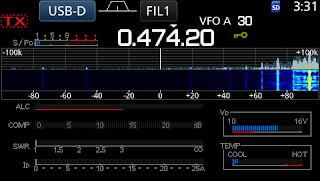 630m band WSPR frequency at night, the S meter hovers around S1 when AM broadcast stations reduce power and/or switch their antenna patterns.

Note: The time displayed on the IC-7300 clock top right is UTC.

Since switching back to using an OCFD a few days ago, I no longer have the receiver overloading issue during the day on 630m. It seems to have knocked back the signal levels from the AM broadcast stations enough but with out appearing to adversely affect the WSPR receive performance.
Posted by Lonney at 8:46 AM
Labels: Digital_Modes, Ham_Radio, WSPR
Newer Post Older Post Home