Something I've noticed is that most don't consider is the whole picture when it comes to antenna gain. Often only peak gain at the wave angle it occurs at is quoted. Sometimes a pattern is shown with no gain figures which is useless, this is often the case with verticals.

To build a picture of what one might expect when considering low band DX antennas, I feel it's better to consider the gain at different wave angles.

To illustrate this, I created a table in a spreadsheet with several different antennas and the gain they have at different angles. LiberOffice Calc has the option to fill cell background color based on the value. The table is sorted based on the gain at 5 degrees. 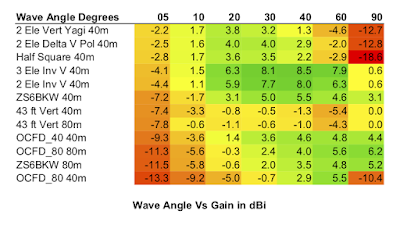 I used MMANA-GAL for the modeling of these antennas. Most are 40m antennas, those that can be matched on 80m are also shown.


Nov 15 2019:
Looking at the models of OCFDs again - I realized due to the lobe formation being either side of the X or Y axis on 40m and above, the far field plot does not show the peak gain as its simply sliced down the X axis. The geometry would need to be offset such that one of the main lobes aligns with the X axis. Comparing the elevation and gain results on the calculation tab with a plain 40m dipole vs an 80m OCFD on 40m band, the OCFD has around 1 dBi more gain at the same elevation angle (52 degrees when 12m above ground), which comes from the two broadside nulls that form. Under far field plots, the far field elevation angle can be changed, comparing gain at 40, 30, 20 and 10 degrees shows the OCFD having about 1 dBi more than a dipole at the same height.

I'll need to update my table..
Posted by Lonney at 8:54 AM
Labels: Antennas, Ham_Radio

One of the antenna projects I wanted to get finished off this summer was get the 40m OCFD up in a flat-top configuration.

Got thinking about how I'd lack an antenna that covers 75m NVIS, thought about an 80m OCFD again. At 135ft long, the current situation with tree shapes, sizes and locations leave that easier said than done, and not for a lack of trying with out resorting to chainsaws. Having said that, getting one of two 80ft Fir trees closest to the house removed is on the list, so I may be-able put up longer wire antennas in the future.

After considering a few ideas, I took a closer look at the ZS6BKW antenna which is an optimized variant of the well known G5RV. This antenna checks the boxes on these points:

Spent a couple weeks reading everything I could find, and playing with models - one is included with MMANA-GAL, others can be found online.

Decided it was worth trying out. Initially I was going to order the parts from The Wireman and build it my self, but found a source of these pre-made cheaper and better built for $60 (normally $90) plus shipping from Amateur Radio Supplies => ZS6BKW G5RV 80, so went that route.

How does it work?

Nine bands where only three need an ATU, with 93 feet of wire in the air is OK by me. 30m might be an issue for some, but you can't always win 'em all :-)