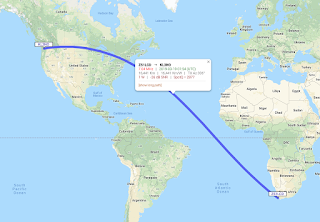 After running WSPR for about three months, I took a break from it about a week ago having built up a good feel for what I can expect with the current antenna configuration. Last night I had it running again after adding a 20 ft horizontal wire to the top of the 43 ft vertical turning it into a 1/4 wave inverted L on 80m.

With the exception of 60m, Remote ATU has no problem finding 1:1 match 80 thru 10m, 40m was the surprise since the antenna is close to a 1/2 wave. Hard to know with out an antenna analyzer to see what is really going on. I'll soon have a better idea, ordered a RigExpert AA-55 analyzer, and another 40 x 32 ft radials for the vertical / inverted L to bring the total to 60.
Posted by Lonney at 6:21 AM
Labels: Digital_Modes, Ham_Radio, WSPR
Newer Post Older Post Home