After around 10 years away from the hobby due to travel, marriage, children, moving a few times, and finally buying a house, I made the [fatal] mistake of looking at Icom's website and seeing the IC-7300 on there, and before I knew it I had ordered one along with a bunch of other stuff. 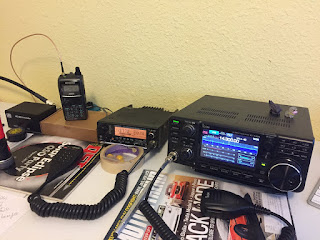 As always, things start simple, a couple of rigs on a folding table in the spare room.

My current station consists of:

Icom IC-7300, bang for buck these are amazing, I don't need to repeat the dozens of reviews that can be found.

Carolina Windom 80 at 40ft, I've built and used OCFDs before, they are simple and work well for what they are. The Carolina Windom I bought from the man him self. I'm not entirely convinced the vertical radiator does much useful other than pick up vertically polarized noise, I cant find any detailed models / radiation patterns online, no one seems to have done any, or put them online.

LDG RT-600 Remote ATU, not entirely impressed with this, the internal tuner in the 7300 does a better job sometimes, I was offered the weak excuse of the coax losses absorbing some of the reflected power and thus giving the internal tuner an easier match. Um wait a minute, the RT-600 is intended to be at the antenna end, and should be-able to handle this. And sure if I was using 200 ft of RG-58 thats going to help a shack tuner, but I'm using 100ft of LMR-400, which is so lossless on HF it shouldn't make a difference what end of the coax the tuner is on. More experimentation needed.

Kenwood TM-731A - I already had this, in-fact I brought it with me from New Zealand. I love these older dualbanders with ham band only receivers, this makes the front ends nice and robust against intermod - desirable when you're mobile in todays RF filled environments.

First time I have had a station setup in populated area, and the noise on HF is a real pain, its safe to say I have been spoilt with very quiet locations in the past when I was active on HF! After smashing in a good grounding rod at the remote ATU for the Windom, and installing clamp on ferrites around the feedlines where they enter the shack, this made a vast improvement. I suspect there is a dodgy powerline insulator or transformer nearby, as I get power line type fizz noise, even up into the VHF bands!

A quick run down of the past: