I recently ran across some photos of the primary Auckland VHF Group repeater site someone had sent me, I don't recall who. However, repeater systems are a subject that interests me, so I tend to absorb details and turn inside-out with excitement when someone offers to take me along for a site visit. 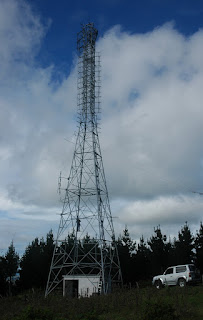 The Auckland VHF Group is located in Auckland New Zealand. Along with the Waikato VHF Group, and the Wellington VHF Group, these clubs have strong membership and skill levels. A subset of members have day jobs in RF engineering and radio communication fields. These three clubs built some great repeater systems in their respective areas.

They would also outreach into other areas and help clubs get well engineered repeater systems up and running. Most of this work was done in the mid '80s, during what was arguably the heyday of ham radio clubs when memberships peaked.

Getting back to the Auckland VHF Group, they built a repeater site named Klondyke after the road it's on. Located at Port Waikato on the west coast, it's about 40 miles south west of Auckland city.

This site served as the Auckland end of the 70cm [430MHz] national link when first built which linked to Wellington [Belmont 439.875-] about 300 miles south via one intermediate site located on Mt Taranaki [Egmont 434.900+]. Over the years it has since expanded to dozens of linked repeaters, exclusively RF linked on 70cm - NZART map here - its approximate at best. Google Map that I created here, the locations are with-in tens of feet in most cases.

With that out of the way, the point of this post is more the 2m repeater at the site. 146.625- a.k.a. "Auckland 6625", my knowledge of the equipment used is somewhat vague, but this is from what I recall of conversations I had around 10 years ago with Colin ZL1ACM who was one of the principal engineers of the site. The repeater hardware is [or was] Tait T300 gear, with two voted receivers, two exciters, two sets of duplexers, and two power amplifiers set to about 40W - This balanced the TX and RX range with typical 25W to 50W 2m mobile rigs, no one likes a repeater that talks further than it hears!.. Nothing too amazing there compared to some of the ham radio repeater systems built in the US..

Now, onto the fun part. The antenna system they built I think is an amazing feat of engineering for a ham radio club!

These are broad side collinear arrays, but rather than have resonant reflectors, they have a grid type panel behind the driven elements. The antennas were constructed from steel, the driven element stand offs [The center of a 1/2 wave dipole can be grounded with no ill effects] and dipoles are angle iron, everything - reflector panel, stand offs, and driven elements - are welded and hot dip galvanized as one piece.

There is a north bay, and a south bay [hence the two sets of receive and transmit chains], each panel has three sets of two half wave dipoles fed in phase, there are four of these panels stacked on each side. This adds up to around 18dBi of gain per side?! The beam width is 70 degrees from memory.

Above is a shot of the tower and building, HF wire antenna can be made out, this is used to transmit the monthly NZART official broadcast on 3.900MHz, as well as out on the 2m repeater and 70cm national link system.

Here is a close up with some details marked out, each of the four bays on each side is fed in at the middle set of dipoles, you can make out the crossed phasing lines.

You can also see someone climbing the tower, they moved the 70cm link yagi to Mt Taranaki [Egmont 434.900+] further up the tower as there were some pine trees near by growing up and obstructing the path

One of the really interesting things about this 2m repeater and its astronomical antenna gain, it is very very very sensitive to band conditions once you got around 100 plus miles away. If there was the slightest hint of a band lift, this repeater would shoot up the S meter in strength. Once it pegged at S9+30dB, it was time to start looking for band openings. Some times it would consistently swing in signal level from seconds to minutes, other times it would bottom out and disappear all together..

This repeater could be reliably worked up-to 150 miles in each direction, with the potential for 300 mile separation between stations at the opposite ends of its coverage. Much of this is over less than ideal paths, not bad considering the repeater site is only 1309ft ASL. When band lifts are present the range would easily extend beyond this.

Now some say this antenna design was borrowed from the Mt Kaukau VHF low band [45MHz and 55MHz] TV broadcast antennas, click the image below for a high res version, and look at the top, horizontally polarized for TV, but looks familiar doesn't it? The Belmont 147.100+ repeater built by the Wellington VHF Group also used antennas based on this design.

After reading Runt Radials I ordered some 19" radials from Comet, these also fit the Diamond antennas.

My Diamond X50 came with the 7" radials, and I've had problems with the coax getting "hot" [common mode currents] with RF when using it on 2m.

Diamond X50 mounted on 2nd level deck. I'm located in the south Puget Sound at 400ft ASL, and have a clear view north towards Seattle (35 miles north), this is a secondary antenna connected to my Kenwood TH-D72 hand held. With 500 mW I can open the 145.190MHz N7GDE repeater located 100 miles north of my location.

While I have not done any form of testing that's scientific, the anecdotal results are slightly better performance on both 2m and 70cm, with the added bonus of the feedline being better decoupled from the antenna on 2m.
Posted by Lonney at 3:52 PM
Labels: Antennas, Ham_Radio

How to use the WWARA coordinated repeater DB extract, Excel or LibreOffice Calc, and CHIRP to program a Kenwood TH-D72 - or any other CHRIP supported rig. Noting this to remind my self how to do it in 17 easy steps!

Issues with this configuration, the single 6m radial results in narrow bandwidth, and more importantly, may not properly decouple the antenna from the feed-line! Take a look at:

Since learning about the compromise radials on these antennas, I decided to try out a set of three full sized 1/4 radials for 6m, the comparison:


First with the supplied tuning radial centered around the FM repeater inputs used in Western Washington:

Next up, three full sized 1/4 wave radials, I trimmed these until the SWR just started to sneak up from 1:1 at 50.0 MHz:

Very nice, the bandwidth is nearly doubled! The antenna is now usable down to 50.0, and up into the FM repeater inputs in my area. I'm thinking I could cover the top 2MHz of the band with a second set of radials cut shorter and placed in-between the longer ones.

The 6m 1/4 wave radials I made out of some wire, with lugs crimped, soldered, applied "Lanocote", some heat shrink to seal it in, and offer strain relief where the wire is crimped. I attached them between the locking nuts and antenna base where the radials screw in, applied more "Lanocote" for good measure. The antenna is on a short TV J-Mount on an roof apex, two of the wire radials are laid on the roof which slopes away - note my roof is composite shingle over plywood and not tin/metal as is more common in other countries - the other has a short section of thin nylon rope to hold it up at about the same angle.

I replaced the 6m "tuning" radial with a regular radial like the other two supplied radials - I ordered this directly from Comet, along with three more 19" radials for my X50, total cost with postage $36, and yes they use the same thread and locking nut sizes!

The EA4OEZ V2000 mod replaces the factory radials with an M6 bolt and aluminum tubing.

As for the 19" radials, it's not clear where to get these radials from, no one lists them as something you can buy, not knowing where to start, I emailed HRO, Diamond, and Comet asking if they sold these. Comet quickly replied.
Posted by Lonney at 4:40 PM
Labels: 6 meters, Antennas, Ham_Radio

One thing that caught my interest some time ago was the ability to remote control your station, in earlier times this wasn't so easy, but was possible by interconnecting various different pieces of tech together.

This usually consisted of among other things, computer rig control - building the control and audio interface cables, software - HRD for control, Skype on auto answer for the audio, and something like LogMeIn to gain remote access to the PC in the shack that ties it all together, and a laptop with wifi or cellular connection. A friend of mine, ZL1TLJ [SK], was doing exactly that type of setup with a Yaesu FT-1000MP Mark-V Field around 15 years ago.

Much to my delight, things are a little easier now!

The Icom IC-7300 I have offers a USB port that presents to the computer a virtual RS-232 COM port for control, and USB audio devices for audio in and out. One cable does it all, modern rigs are finally in the 21st century!

I figured that by now someone would have written a remote control app for smart phones, turns out one person did with the generosity to make basic functionality free.

See CommCat and CommCat Live - for the applications, documentation - very well written - easy to read, follow and learn from.

With this setup, I can do basic remote control of my rig, which is all I wanted for now. With this I can tune around the bands, change modes, swap between VFO and memory, setup preset user-defined macros in CommCat Mobile to perform other supported functions.

There you have it, this works, costs nothing for basic functions, and after getting the audio levels right, I have held conversations while remote on a local 6m FM repeater with good audio reports using the Apple supplied earbuds/mic that came with my iPhone 6.
Posted by Lonney at 10:27 AM
Labels: Ham_Radio
Newer Posts Older Posts Home
Subscribe to: Posts (Atom)