Got to Victoria about 3 weeks ago after a week in Vancouver. Victoria is on Vancouver Island, and is the provincial capital of British Columbia.

Stuff I did here included having a drink at the Empress Hotel, a tour of Parliament which was quick and interesting followed by a visit to the Royal British Columbia Museum across the street. The museum had displays on aboriginal life pre and post European arrival, which for me not knowing much about them was quite interesting. Finished up with a Victoria cream from Rogers’ Chocolates.

Here’s a picture of the Parliament buildings in Victoria: 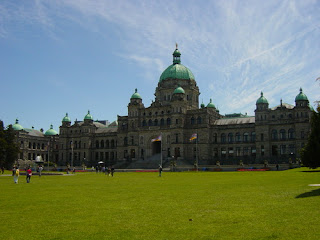 More photos of Victoria and around can be found here.

Have been staying with some friends of my Aunty's here, really nice people. Painted the downstairs bedroom over a couple days, it went from light blue to a nice ‘modern brown’ type colour (that’s the best way I can describe it) that matches the rest of the house now, it looks quite good.

I had a job interview on Saturna Island a couple weeks ago at a vineyard. There were several jobs going, three of us got picked up from the ferry terminal in an old Ford F250 which seats four people across the front seat with ease, there were two other guys that rode their bikes to the vineyard. The interview went well then we walked back the ferry terminal. I saw my first snake on the way, it was quite small and harmless. Torie scared it off the road. We then plonked our selves at the pub for the afternoon until the next ferry at 4pm. Had lunch and some drinks, one of the more enjoyable job interviews I’ve had :o)

There is no jug (electric kettle) in the kitchen. Very perplexing when you simply want to make a cup of tea, hot chocolate or God forbid instant coffee. I turned the kitchen inside out twice looking for a jug, I never found one. At first I had trouble believing there was no jug, who doesn’t have one? How can this be? Maybe I should look again in-case I somehow missed it.. Other suggestions offered include microwaving a tea bag in a cup, yes from cold. I said every time someone does that God kills a puppy ;-)

It’s not boiling, merely hot, so tea, you have not!

Coffee pot machines are pretty standard issue like a toaster. Seems silly to goto the effort of loading it, filling it, waiting for it to dribble out one cup of coffee, so I make 3 or 4 cups in it, then proceed to drink them all because it’s there, then suffer from coffee overdose.. As I’m writing this I’m on my second cup.

Left hand drive cars driving on the right hand side of the road seems normal now but did it seem really weird and comical at the same time when I first got here - this is so silly, how can I take this place seriously? I still look the wrong way when crossing the road, and have to check again. Intersections seem like a circus because everything is happening back to front.

In other news, there was an earth quake north of Ottawa last week. Protesters had a fun time trashing and smashing their way around downtown Toronto during the G20 summit there. The Queen is visiting Canada at the moment too, personally I like the Queen and our connection with the commonwealth, it’s good.

A book I recently enjoyed reading was In a Sunburned County by Bill Bryson, I don’t often find books I can read with out getting bored silly, so that’s saying something!

Canada Day was the day before yesterday. I had hoped to go into town and find my self in a pub, but I was shattered from my overnight bus trip back from Revelstoke. This lameness aside, Canadians enjoy their national day with beer, parties, and fireworks displays. It’s good to see them take it seriously and have some fun. Unlike our national embarrassment day..

As for Revelstoke, I went there to see about a job. It’s an 8 to 10 hour ride on the Greyhound bus, I’m glad I had that good book to read. To give you some idea of the distances involved and the size of this country have a look at this:

That’s about the same distance between Wellington and Auckland!

Left Victoria at 7.30am, bus, ferry, bus, skytrain, to Pacific Central station, then left Vancouver at about 2pm, and with a couple of stops for food and 564km later we rolled into Revelstoke at 11.15pm. I then had to walk 30 mins to the hostel, that was after I asked someone in Denny’s for directions because I forgot to work that part of my trip out! Sure made for a very long day. That aside Revelstoke is something like twice the size of Dargaville, except it’s on the main highway and rail line between Calgary and Vancouver, has mountains, a big hydro electric dam, big ski resort and good range of shops, services and places to eat with out feeling touristy. Quite a neat place. Some photos here.

And after three weeks of waiting I received a new charger for my phones from Cellphone Shop today. I had to really economise cellphone use to make it last this long after my charger went 'missing’ in Vancouver. On the plus side I have one charger that will do both my old Nokia 3200 and the new one, so I’m happy with that.

On Sunday I’m going back to Vancouver, staying the night then catching the Greyhound bus to Revelstoke to start a part time job and look for another.
Posted by Lonney at 11:22 AM
Labels: Canada, Travel
Newer Post Older Post Home