I left James and Debbie’s in Victoria yesterday after staying there a couple weeks. Being a Sunday afternoon the bus to Swartz Bay was full, and there were a lot of people on the ferry. The two bendy buses from the Vancouver end to Bridgeport where you meet the Skytrain were jammed full.

Unlike my last ride on the 620 bus when I was going back to Victoria, there were no ‘near misses’ (nearly missed? That doesn’t make sense) with trucks. That driver was insane, the second time he nearly hit the truck he was passing - over double yellow lines onto a yellow median strip. That was extremely close, I was sitting in the back of the bendy bus seeing the rapidly diminishing space between bus and truck as he swerved back in, the other guy in the back seat was like 'faaarrk’ as it happened. Was actually freaky. Feeling that this was reasonably and unnecessarily dangerous I reported the incident on the bus companies website.

Anyhow, I had a 5am start to catch the 6.30am bus so I stayed in a private room at C & N Backpackers 5 mins walk from the Greyhound bus station. I discovered this street lead into Chinatown. Being the evening I went for a wander with the camera and happened across the Vancouver Chinatown Night Market. 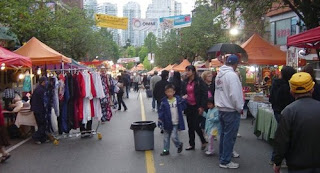 I didn’t buy anything here, but I did get five t-shirts with different Vancouver prints on them for $20 from a gift shop, mainly because I needed some t-shirts.

Again the bus from Vancouver to Revelstoke was packed full being the first day of summer holidays. After 9 hours of riding the Greyhound bus I was in Revelstoke.

Tomorrow I start my training on the front desk at the hostel here and will attempt to motivate my self to find another part time job in town so I can start saving some money!
Posted by Lonney at 11:26 AM
Labels: Canada, Travel
Newer Post Older Post Home